Back to the VirtualPG tutorial

You can use SSH also for establishing safe connections to remote PostgreSQL servers, but this requires to activate some special SSH feature known as port forwarding aka SSH tunneling. 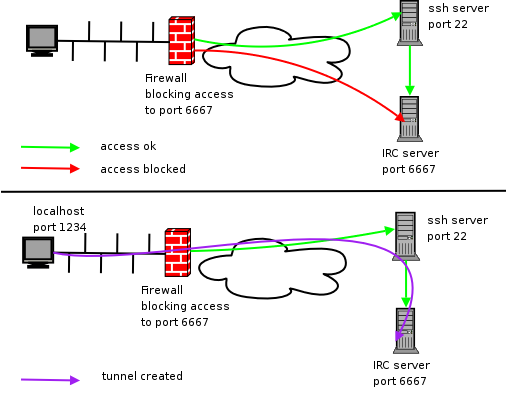 The problem: you are attempting to establish a network connection between your local machine and a remote server on IP Port 6667.
But the Firewall forbids any connection to port 6667 (represented in the above figure by the red arrow); and there is a very good reason for doing this.
If port 6667 was enabled to accept any incoming traffic from the outside, this would open a severe security breach, because anyone (and not you only) could freely connect to the server.
Even worst, the traffic over the connection could be not cyphered (or only weakly cyphered), and consequently very easy to be maliciously intercepted or falsified.

The perfect solution: as we've already seen, the SSH protocol was invented for ensuring safe network connections based on strong encryption.
The standard IP Port for SSH is 22, and firewalls are usually configured so to allow connections on port 22 (green arrow).
So we just require some appropriate magic trick capable of tunneling our own traffic over an SSH connection. Let's see in full detail how it works:

We'll suppose that some SSH server will be already installed and configured on the remote server, and that the Firewall configuration will accept external connections to port 22.
If not, please check the appropriate technical documentation for your system.
OpenSSH (both client and server) is almost universally supported by all Linux distributions and by many Unix-like systems, this including Mac OS X.

Once ensured that anything is correctly working on the server side, setting up Port Forwarding / SSH Tunneling just requires few simple actions on the client side (your local machine).
Unhappily this is quite different on Unix-like systems and on MS Windows, so we'll examine each of them separately.

Note: the following directives are supposed to be valid on any Unix-like system, ranging from Linux to OpenBSD, Mac OS X and alike. 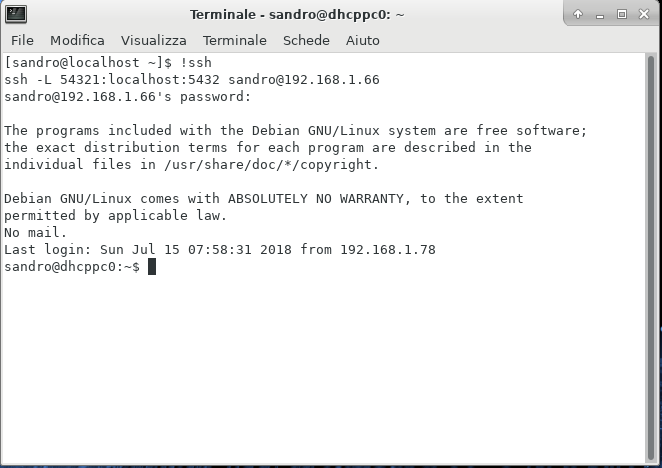 The most renowned SSH client for MS Windows (all versions) is PuTTY (open source).
If you've not already installed PuTTY on your Windows box, you can download it from here.

Back to the VirtualPG tutorial