back to the OSM tools main page

Syntax:
Example:
the above shown command must be invoked from the shell:
Please note: sometimes you can notice many Unresolved-Node or Unresolved-Way warning messages: dont be too much worried.
This simply means that your OSM input file does actually contains several broken cross-references (i.e. invalid complex Map objects).
This one is a quite common situation, but it's rather innocuous (invalid objects will be simply ignored, fully preserving any other valid object). 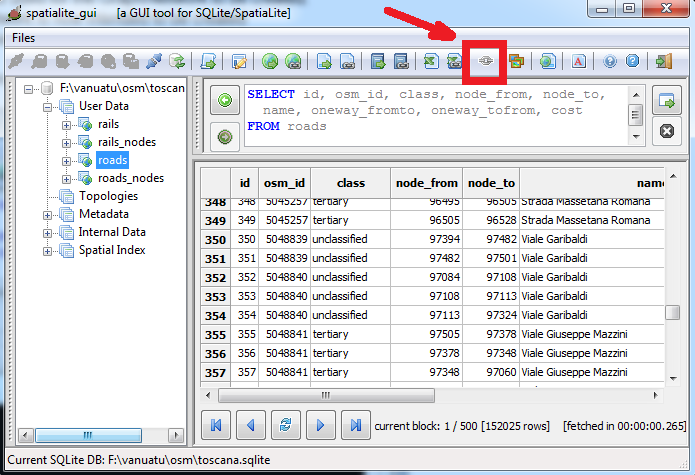 ... you can explore this DB-file e.g. using spatialite_gui. As you can notice, there are four tables in this DB-file:
Please note: you can directly use the Build Network feature available on the GUI tool in order to create a VirtualNetwork supporting Routing queries.
Alternatively you can use the same feature available on spatialite_gis, or you can use the spatialite_network CLI tool; both them performs the same identical task. 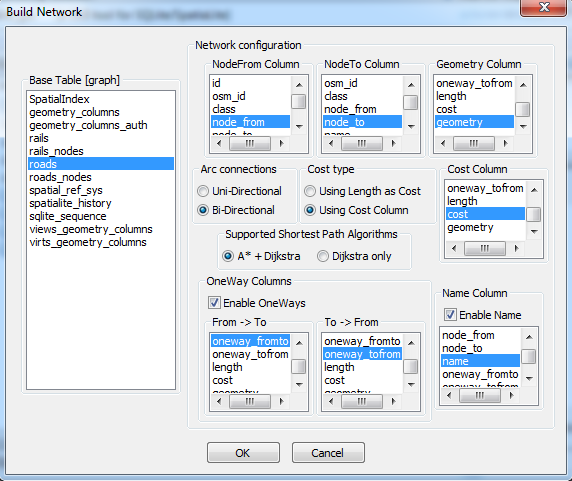 This is an example illustrating how-to build a full-qualified VirtualNetwork corresponding to Roads.
You can then directly query this VirtualNetwork in order to get Routing solutions. 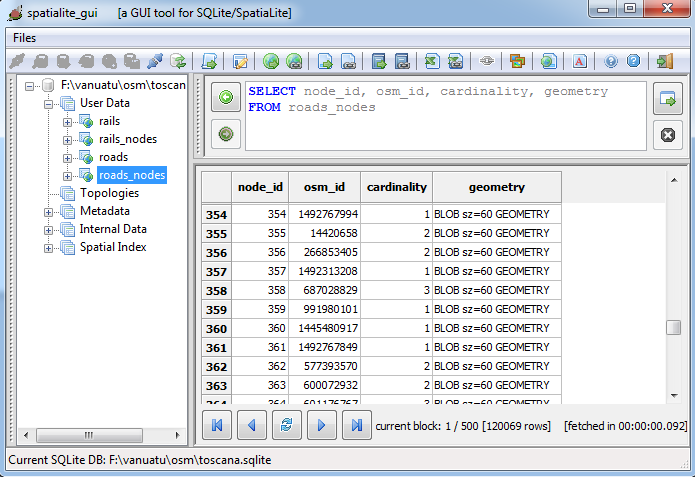 The roads_nodes and rails_nodes may appear to be needless redundant: they are not strictly required in order to correctly represent the Graph, because all Nodes are implicitly defined by Arcs. Anyway there are really good reasons suggesting to create an explicit representation for Nodes:

OSM dataset are not always regularly self-consistent as expected: a wide variability exists from zone to zone, accordingly to local mapper's tastes and preferences.
Remember, OSM is community-driven project: a standard tags definition exists, but this simply being based on a a loose (and freely variable) dictionary.
So it's not at all surprising to eventually discover that many inconsistencies exist, and that variable criteria may have been adopted in different zones by different mapping communities.

In the previous examples we have simply used the standard default configuration assumed by spatialite_osm_net to be the one best fit for average cases.
Anyway a much more sophisticated and more flexible configuration is now supported by spatialite_osm_net, one based on external template-files.
The above one is a full example of such template-file:
You can use the -ot template-path argument in order to create a template-file exactly corresponding to default settings; you can then re-arrange such template as required by your specific settings simply using any text-editor.

Finally you simply have to invoke spatialite_osm_net by passing a -tf template-path argument in order to override all default settings.

back to the OSM tools main page