Back to main Wiki page 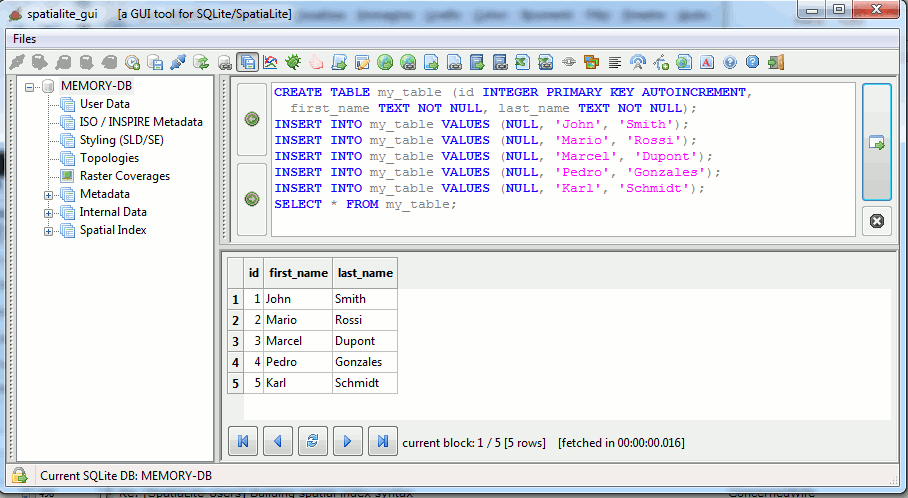 The execution of multiple SQL statements in a single pass is now supported:

As you probably remember, there are few SQL functions supported by SpatiaLite that could eventually pose some security concern because they implement some kind of direct data exchange between the DB and the local file-system.
In the worst possible scenario an hypothetical hacker could eventually attempt to attack an external system by offering for download a purposely forged SpatiaLite DB containing maliciously forged Triggers, and the user will then be completely unaware of such a potentially dangerous threat.

The standard approach implemented by libspatialite is the one to always keep completely disabled all these potentially harmful SQL functions, unless the environment variable SPATIALITE_SECURITY=relaxed is explicitly set by the user.
Now spatialite_gui support a smarter and easiest approach, completely based on internal actions and no longer requiring any explicit user action. 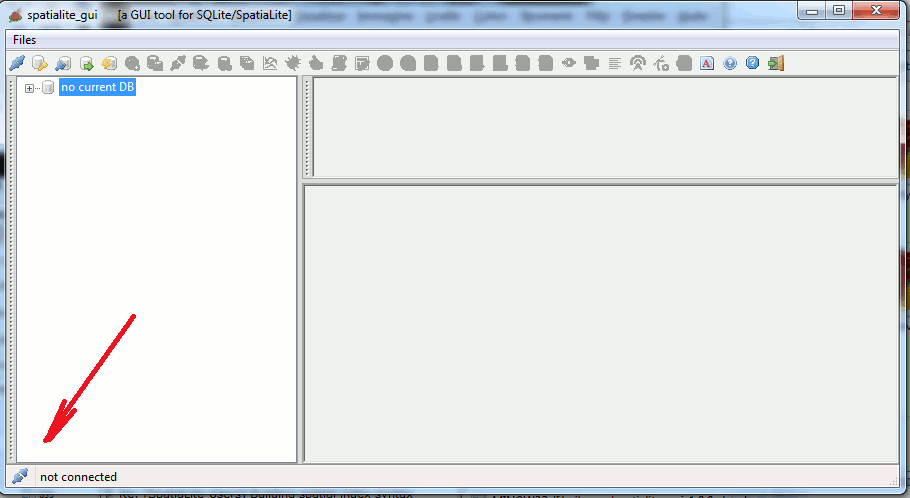 case A) connecting to a sane DB 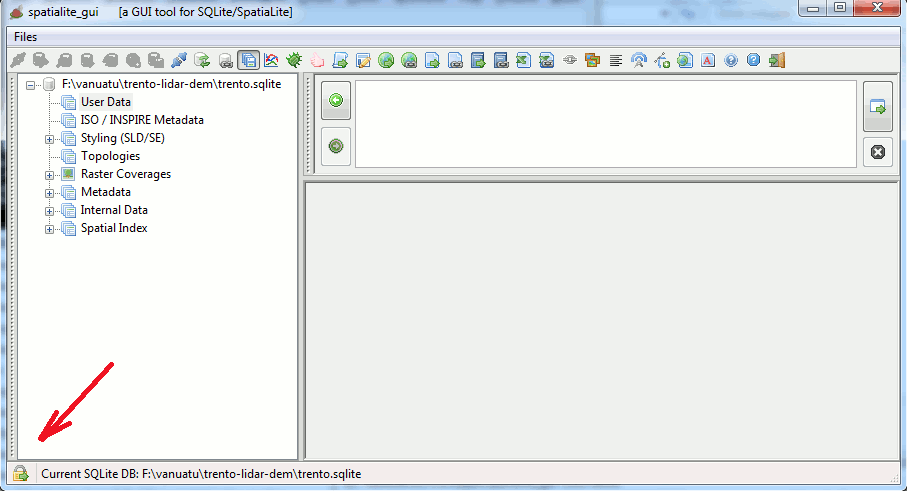 spatialite_gui will now always perform a preliminary sanity check before connecting to an existing DB.

case B) starting a READ ONLY DB connection 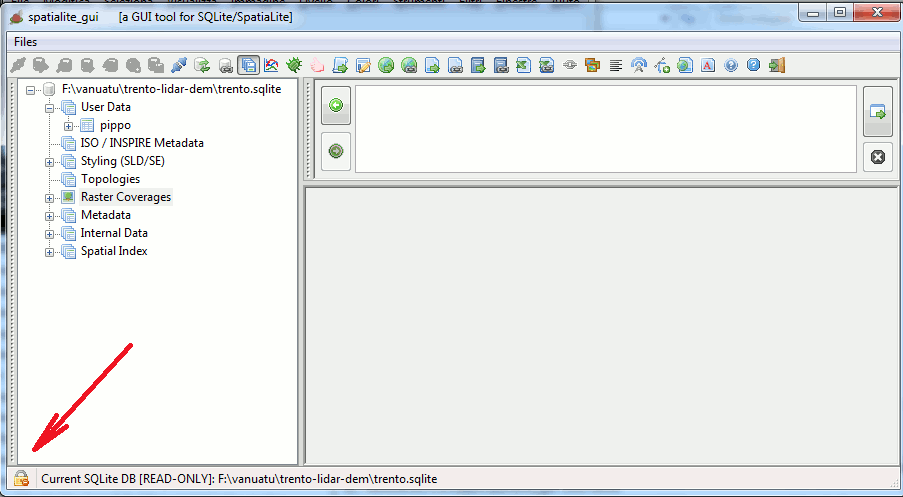 In the unlucky case, when the preliminary security check identifies some problematic Trigger, an appropriate security alert will mmediately be raised. 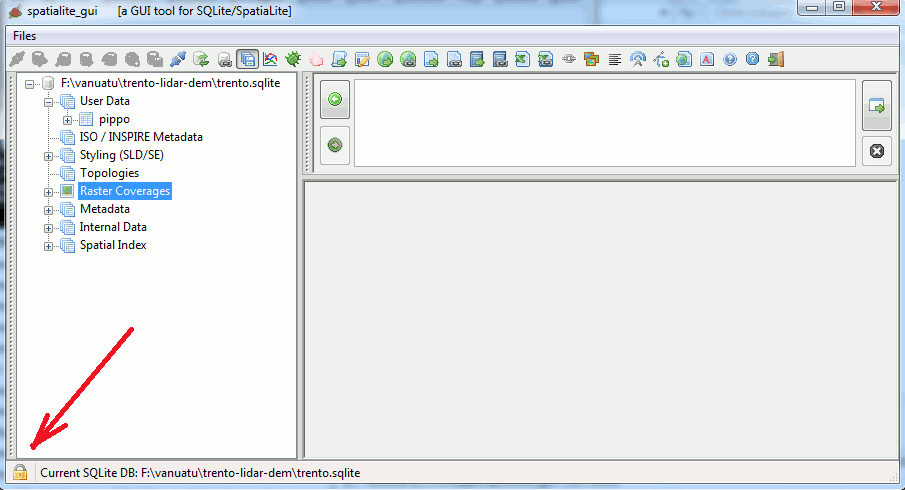 Starting since version 2.0.0 librasterlite2 will become an integral part of spatialite_gui (i.e. it will become a not configurable mandatory dependency). 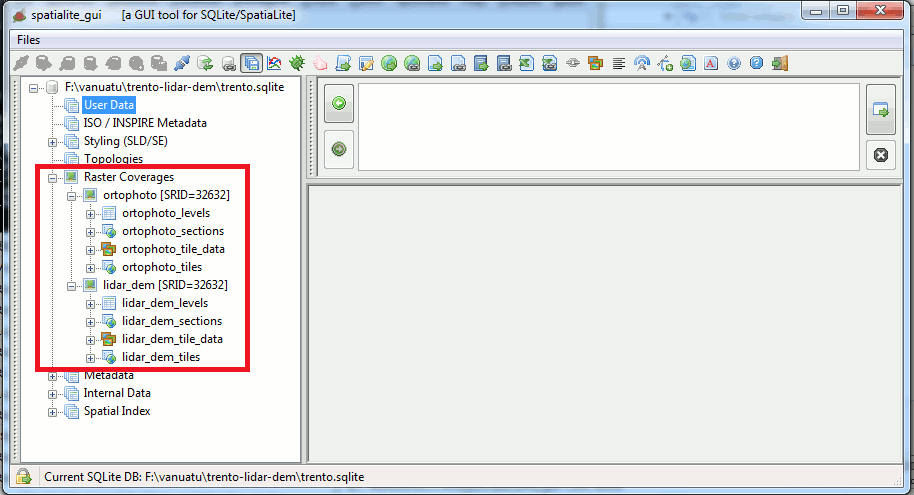 All RasterCoverage-related tables will be hierarchically grouped as a distinct branch of the Tables Tree. 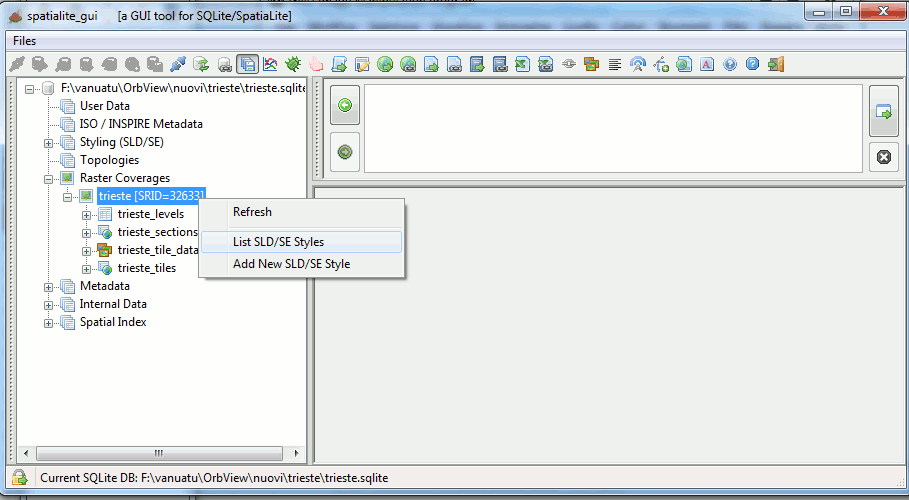 Administering all SLD/SE Styles for each single Raster Coverage will now be directly accessible via the corresponding context menu.

3.2a - Adding a new Raster Style for a given Coverage

You can access this feature from the context menu, which will apply to the corresponding Raster Coverage. 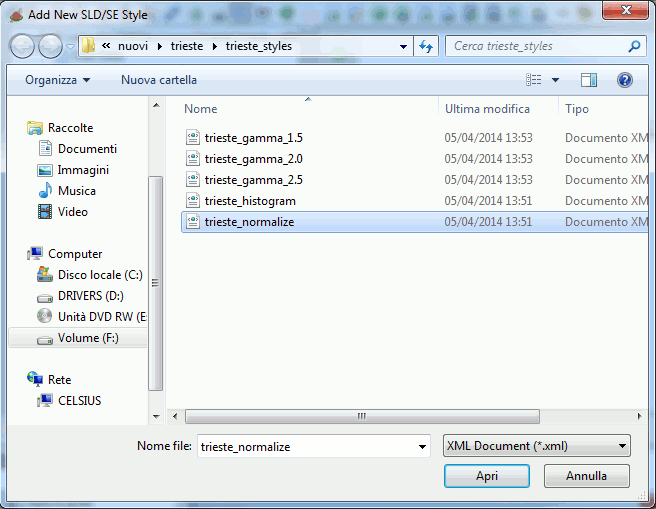 You should first select the XML document, from the file-system, containing the SLD/DE Style you intend to load.

After the file selection and pressing 'OK', the XML document will be parsed and formally checked for full Schema validation as a valid SLD/SE Raster-Symbolizer.
If no error is found then the Style will be immediately added to the Coverage.

3.2b - Listing all Raster Styles for a given Coverage

You can access this feature from the context menu, which will apply to the corresponding Raster Coverage. 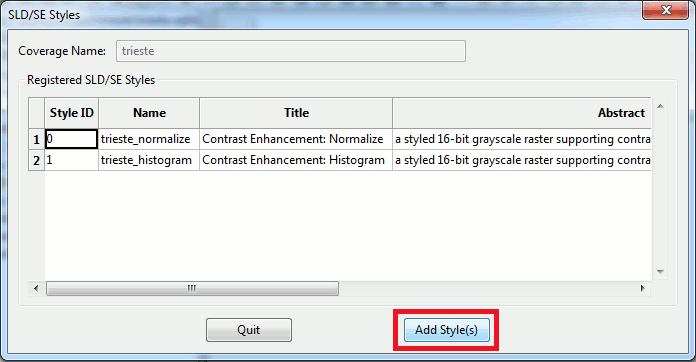 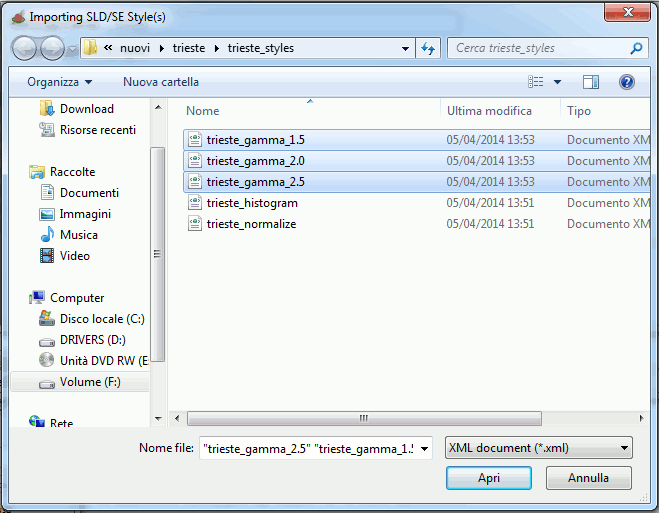 Differently from the above case you can now select multiple files in a single pass. 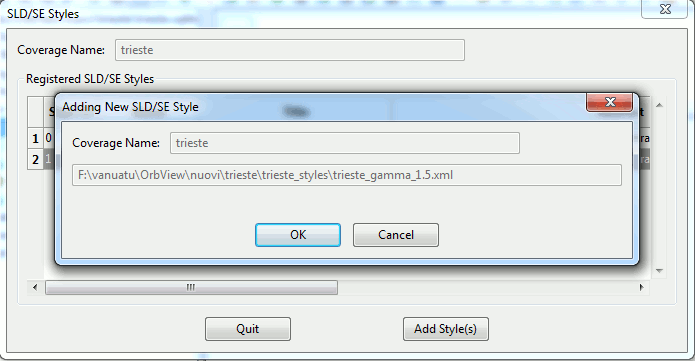 Then each single XML document will be loaded (with a validation check being done for each selected XML document).

You could eventually remove some already defined Style; just left-click on the corresponding row. 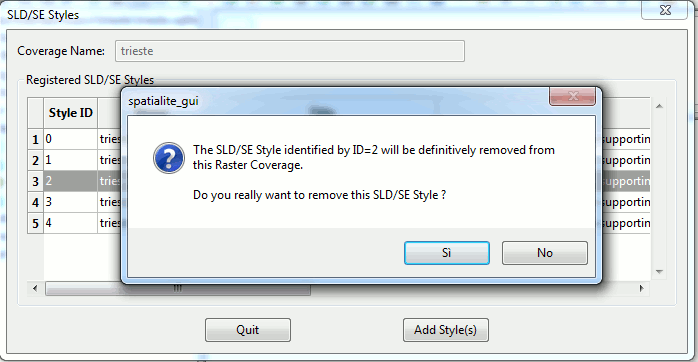 After final confirmation the selected Style will be definitely removed from the Coverage. 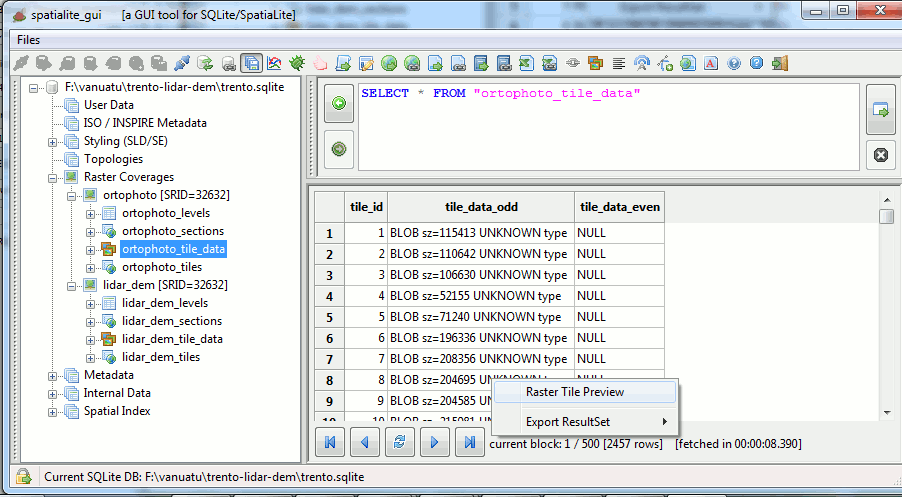 For each <coverage-prefix>_tile_data table (which contains the raster tiles) a preview feature is supported. 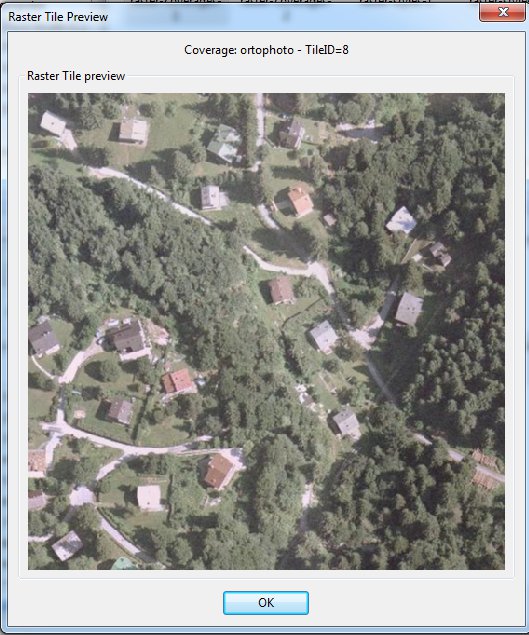 Each tile will be shown accordingly to the Coverage's default style. 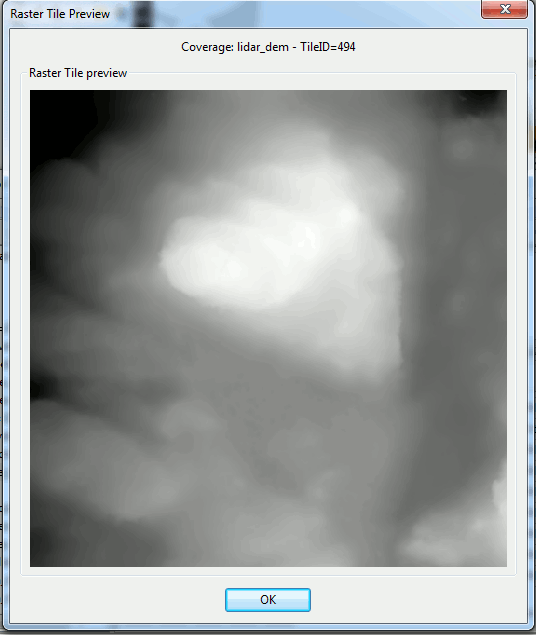 In the case of tiles adopting some exotic pixel format not directly corresponding to a plain RGB color model (e.g. UINT32, FLOAT or DOUBLE) a default grayscale rendering will be adopted.
In the case of multi-band pixels only the first band (Band #0) will be shown.

Back to main Wiki page